The Last Invasion Embroidered Tapestry is 30 metres / 100 feet long by 53cm / 21 inches deep and took four years to complete. It was commissioned by the Fishguard Arts Society as a permanent legacy of the Bicentenary Commemorations. It is now owned by a charitable trust – Fishguard Invasion Centre Trust Ltd.

The Tapestry was designed by Elizabeth Cramp and the embroidery advisers were Rozanne Hawksley, Eirian Short and Audrey Walker. Seventy-seven local people helped to make it. It was designed in a simple format and is the same depth as the Bayeux Tapestry, (which tells the story of the 1066 Norman Invasion). The embroidery stitches are mostly the same as those used by the medieval embroiderers. 178 shades of crewel wool were used and subtle colour changes indicate late winter days, night-time or candle light.

Historical facts and popular legends combine with Elizabeth Cramp’s sense of humour and eye for detail to provide an imaginative interpretation of a little known, but significant, moment of Welsh and British history.

How It Was Made

Design work started in 1993, when Elizabeth Cramp was asked to design a 100 foot long by 20 inches deep embroidery, depicting the 1797 invasion of West Wales by the French.  It was planned as a community project to celebrate the bicentenary of that event, in 1997. Elizabeth Cramp researched the history of the event which she then drew onto a quarter-size cartoon in soft 4b pencil. The next stage was using 3 rolls of paper to convert the quarter-size design to the full size cartoon.

The Invasion Tapestry was worked on a natural cotton which looked like linen. For the Tapestry Appleton’s Crewel Wool was used; it is moth-proofed, does not fade and comes in hundreds of shades. It is a fine thread so that one, two, three or more strands can be used in a needle. The Tapestry was worked as 37 separate, manageable sized panels which were joined together afterwards. Simple wooden frames were made and the fabric stretched and stapled over the frames. To transfer the design to the fabric a careful tracing was made from Elizabeth’s painting on to ordinary tracing paper. Dressmaker’s tracing carbon was placed between the fabric  and this tracing. Using pens it was then transferred to the fabric. These faint carbon lines where then “inked over” using a very fine waterproof drawing pen.

All the embroiderers were women ranging in age from around thirty to eighty-two years old. The embroiderers organised themselves into groups who would work together on their panels in their own homes. A local builder’s merchant donated suitable wood and Philip Chivers and Denys Short constructed the frames. By December 1994 there were 12 panels ready, complete with instruction charts and allocated wools. Meetings were called from time to time so that embroiderers could compare notes and share ideas.

In the Autumn of 1996 the tapestry came together in one piece and the “overlap” embroidery was completed. In January 1997 a cotton lining was hand sewn to the Tapestry, ready for display.

The Tapestry was unveiled to the public on February 22nd 1997 – the bicentenary of the date the French forces landed at Carreg Wastad. 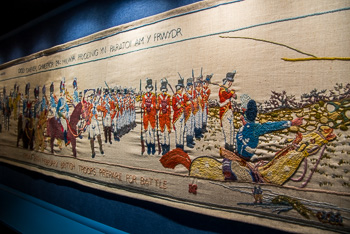 Admission is free, Donations are welcome.